Philadelphia Film Premiere of The Great Flip-Off and PWIFT Party 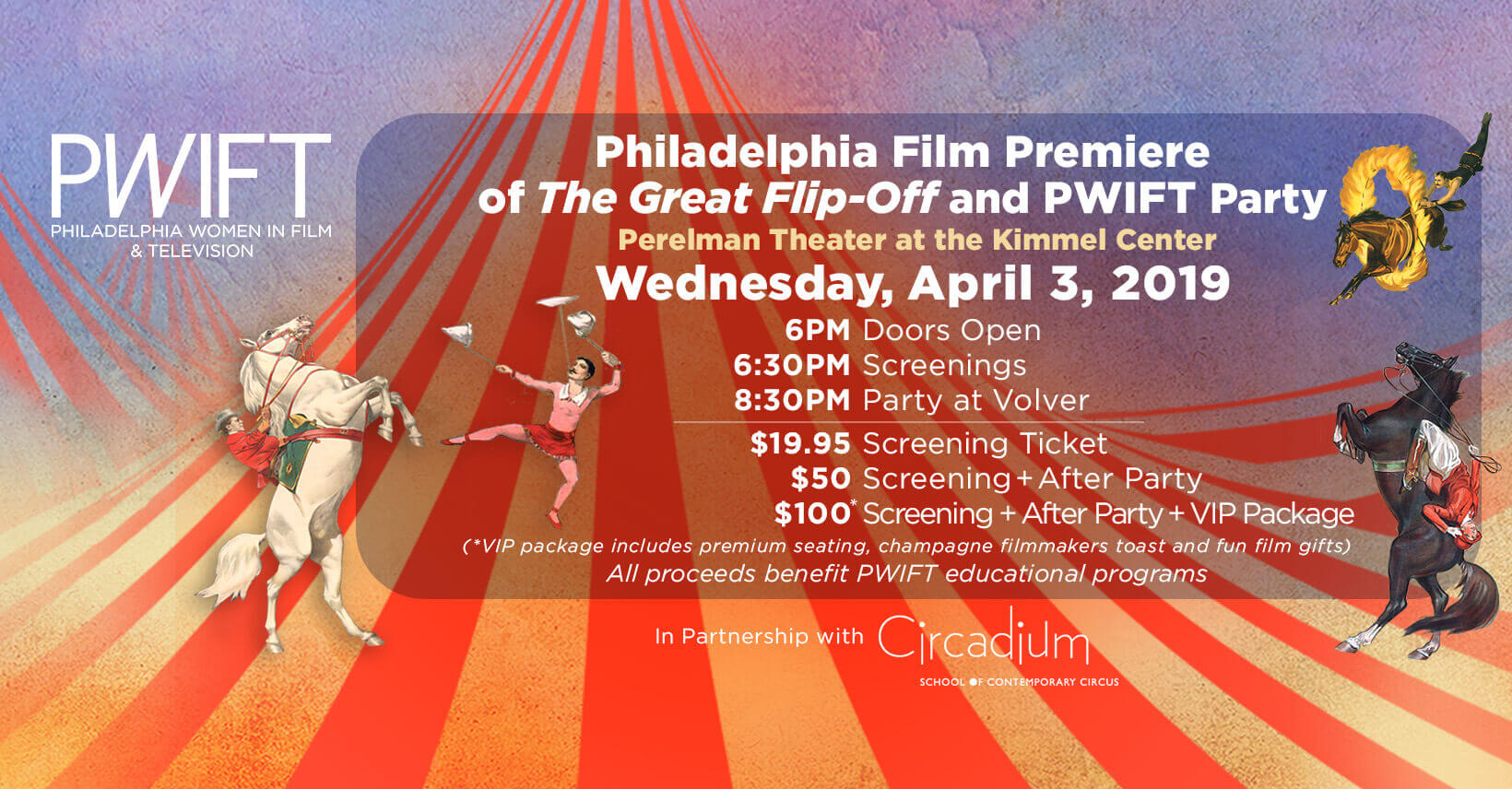 Philadelphia Film Premiere of The Great Flip-Off and PWIFT Party

Philadelphia Women in Film and Television (PWIFT) Celebrates Female Filmmakers and the 225th Anniversary of the American Circus!

The very first American Circus was launched right here in Philadelphia! PWIFT in partnership with Circadium invite you to experience this changing art-form with the premiere of two award-winning circus centric films: The Great Flip-Off, from Producer/Director Dafna Yachin and Live Your Light, a short film by DP/Director Jendra Jarnagin.

Join our Ringmistress at Volver for the ultimate After Show with live circus artists, drinks, small plates and even more entertainment!

Perelman Theater at the Kimmel Center

Live your Light, Poetically profiles eight unique professional performers from the Bushwick Brooklyn circus arts collaborative called “House of Yes” as they perform for the camera in this stylized dance film. Short:  5 minutes

Dafna Yachin is an indie filmmaker and founding partner and creative director for Lunchbox Communications.  For more than 25 years, Dafna has written, produced and directed award-winning television, film, and multimedia productions. Her documentaries and specials have aired on CBS, ABC and SyFy (among others). She has been instrumental in creating lasting series formats on Discovery, the Travel Channel and Comcast. As a co-writer and director of more than 50 film/HD national and international spots, Dafna has managed teams in 30 countries. A seasoned storyteller, Yachin’s indie documentaries focus on anthropologic preservation and social impact. Her feature length HD documentary “Digital Dharma: One Man’s Mission to Save a Culture” recounted the rescue, preservation and digitization of Tibetan Buddhist literary culture.  The film captured prizes internationally and qualified for Oscar consideration.  It was also the very first film to be publically screened at The Perelman Theater. Dafna is thrilled her second Feature, The Great Flip-Off , will also have its Philadelphia Premiere at the Perelman.

Filmmaker Jendra Jarnagin is an esteemed, award-winning Director of Photography, with over 25 years experience and dozens of credits in feature films, episodic television, web series, commercials, music videos, documentaries and virtual reality.  She has added directing commercials, music videos, and short documentaries to her repertoire in the last several years. Canon commissioned Jendra to make her own film to be shown at The Whitney Museum as a showpiece for the release of their new 5D Mark iv camera.   She conceived the inspirational, experimental dance film Live Your Light, which she directed, produced and shot.  The film went on to win the Experimental category in the Brooklyn, Coney Island and Culver City film festivals, and Jendra was selected for SHOOT Magazine’s prestigious 2017 New Director’s Showcase.

As director, she has also collaborated on music videos and documentaries, including political ads and environmental projects with Mark Ruffalo, and as field director for many segments of the international documentary, Women Behind the Camera.  She has produced her own commercials, a short film, and received associate producer credit on the feature film TRI, for which she served as Director of Photography.

As director, Jendra is represented by The Director’s Network, and as Cinematographer by Agency for the Performing Arts.  She is a graduate of NYU’s Tisch School of the Arts Undergraduate Film Program.